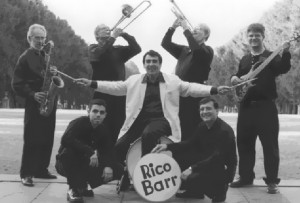 The Rock n Roll Dance Party will feature songs from Van Morrison, The Cars, The Beatles, and Bruno Mars, Aretha Franklin. The Pointer Sisters, Train, Boz Scaggs,  The Stray Cats, Journey, Loggins and Messina, The Temptations, Stevie Wonder, Santana  and many, many more.

Among Those Featured with the Band will be:

Rico Barr Lead Vocals.  Appears with the Neville Bros. on CMJ Volume 13.  He has played backup for Chuck Berry.  Nominated as Swing Vocalist of the Year by the National Swing Awards.  Written over 300 songs including the Regional Dance Hit Forbidden Love.  Appears in the upcoming Disney movie “The Finest Hours” starring Chris Pine.

Jacques Raymond Bass & Vocals.  Performs a variety of musical styles; however, he has never forgotten his rock & roll roots.  The energy and music of artists like Elvis Presley, Jerry Lee Lewis, Chuck Berry and Fats Domino have been a big influence on him.  He carries on the rock & roll spirit and tradition by singing songs like “I Hear You Knocking”, “Memphis” and “Mony, Mony”.

Jim Bass Guitar.  Aa self-taught musician who brings decades of rock & roll experience to this venture.  A road veteran who has toured coast to coast with national recording acts, including playing with keyboard great, Brian Auger in Vancouver, British Columbia and with members of Kool & The Gang at the Resorts International Casino in Atlantic City.

The JJR Horns will be adding additional excitement to this Rock ‘n’ Roll Groove Fest.

This distinctive event brings together a historic place and a local accomplished band. The combination of the two will present a unique setting in which to dance, make new friends and enjoy private conversations. Step back to the middle of the 19th century and enjoy the music you love.

For further information and to purchase tickets, please visit http://www.meetup.com/socialnetwork-1425/events/226212789/