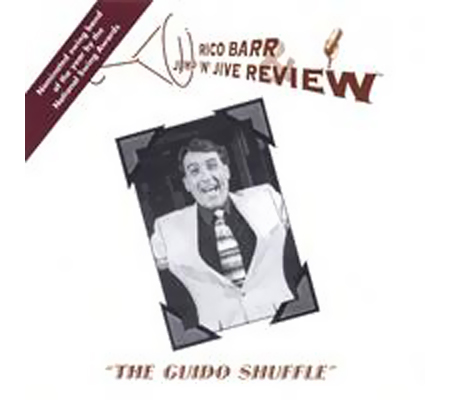 Sounds: Nominated swing band of the year by the National Swing Awards. Contains the original single and title track “The Guido Shuffle” which peaked at #8 after 11 weeks on the Swing Top Forty Charts.
Genre: Jazz, Swing Big Band
Album Notes:
Rico has performed in such diverse settings as jazz and show bands, as well as backing up rock legend, Chuck Berry, playing with Harvey Brooks of The Electric Flag and jazz great, Joe Newman. Rico has written over 300 songs and scored a top forty-dance club hit with Forbidden Love, recorded in both English and Spanish. This song appears on CMJ Volume 16 with the Neville Brothers. In his role with the Jump ‘n’ Jive Review, both playing drums and singing, Rico has been described as a combination of Gene Krupa and Louis Prima both of whose songs are included in the Jump ‘n’ Jive Review repertoire.

Rico Barr and The Jump n Jive Review have scored two Swing top 40 hits. Their single an original selection “The Guido Shuffle “from the C D of the same name peaked at #8 after 11 weeks on the Charts. A second cut from the CD “Robin Hood” a remake of an old Louis Prima record went to #3. The Band has been nominated as Swing Band of The Year by the National Swing Awards. Rico Barr has been nominated as Best vocalist and drummer. The Band’s extensive repertoire also includes Rhythm & Blues, Soul Jazz. Dave Dubinsky was nominated as the best Trumpeter and Carl Reppucci, pianist was nominated as best Pianist.

Here’s what there’re saying about “The Guido Shuffle!”

“It Jumps, swings, rock & rolls with some of the best cover versions you’d want to hear. Masterfully performed in a rousing good time party atmosphere. Rico & The Jump N Jive Review are righteousness in today’s music. They have a fun time and you will too”– BO LEWIS BIG BAND DANCE PARTY