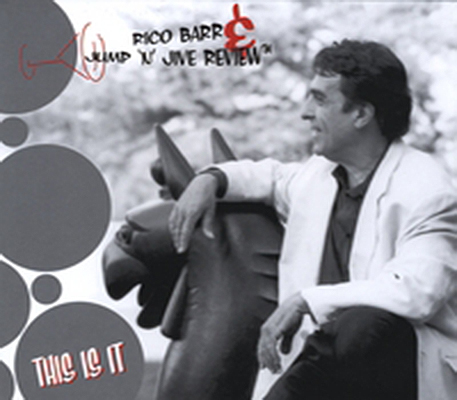 Sounds: Swing meets Salsa
Genre: Jazz, Jazz Vocals
Album Notes:
On this CD Singer, Songwriter and Drummer Rico Barr moving comfortably from Swing to Soul delivers standout performances including Carnival sung in Spanish. CD highlights include his performances on Luck Be A Lady, Me and Mrs Jones and Stagger Lee. The writer of over 300 Songs this CD contains covers of the American Songbook and Latin Classics except for Lady OF The Night a Latin flavored original. Rico scored a regional Dance Club Hit with his recording of “Forbidden Love”. More recently he was nominated as Swing Vocalist and Drummer Of The Year by the National Swing Awards. His previous CD “The Guido Shuffle “was nominated as Swing CD of the year with two of the selections “The Guido Shuffle” and “Robin Hood “reaching #8 and #3 respectively on the Swing Top Forty Charts. The Jump n Jive Review deliver spirited performances throughout with notable solos from former Dallas Symphony Trumpeter Dave Dubinsky [Cherry Pink] and Pianist Carl Reppucci Jr. [Amor Verdadaro], nominated as Swing Pianist Of The Year by the National Swing Awards. Also contributing a vocal to the party is Bassist Peter Mundt the cheif arranger of the Jump n Jive Review.